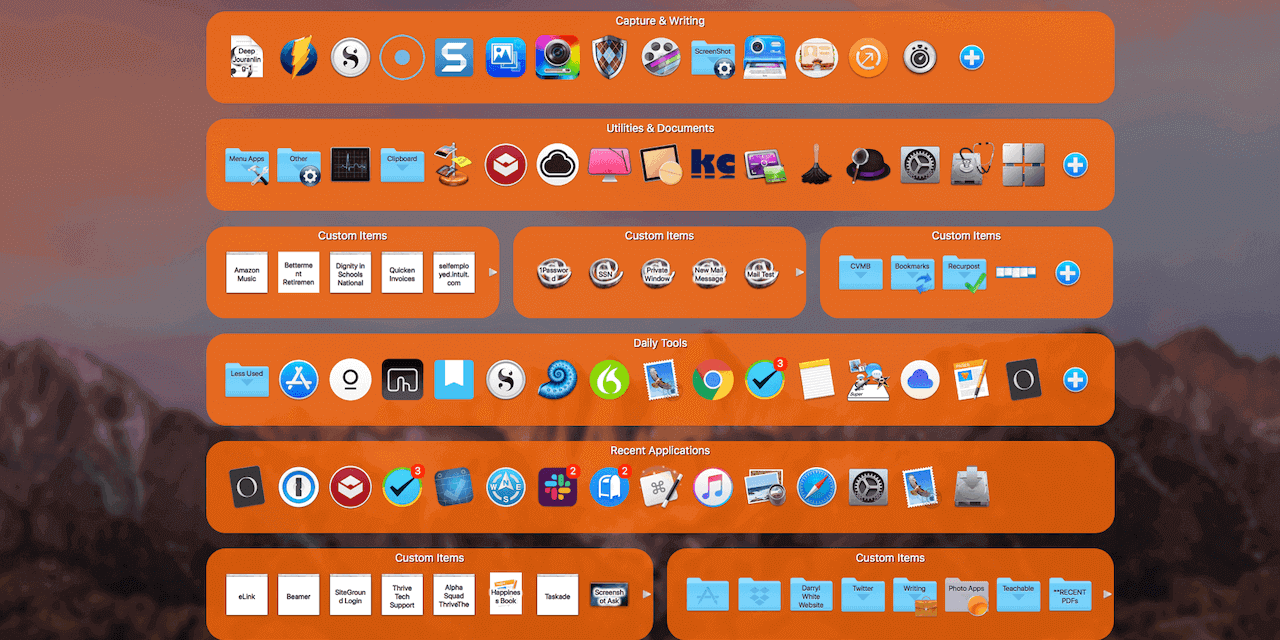 The Apple Dock has been a long-time staple of OS X, but for Mac automators and power users, the Dock is embarrassingly limited when compared to an alternative application like SpriTec's SuperTab.

I’ve been a user of SuperTab for over a year now, and have referenced it in several previous articles for this site. But the recent 4.0 update of SuperTab warrants a well deserved update review of some its automation related features.

Note: this article was first published in March of 2016, and it includes updates for the version 4.0 SuperTab, released in February of 2019.

SuperTab is 60% off, $8, and you can also download a 30-day trial. SuperTab is an affiliate link. Thanks for your support.

SuperTab As a Hidden Dock

Unlike the Dock, SuperTab remains hidden until you trigger it with the assigned hotkey or by pointing your cursor at a specified corner of your screen.

Also unlike the Dock, SuperTab allows for multiple tabs for different types of actions, including trigging screenshots, opening files, applications and bookmarked web page, and even your calendar events.

SuperTab’s also includes an AutoType similar to what is found in TextExpander and Keyboard Maestro that can automatically type preset phrases, passwords, and even menu item and special keys. There’s more about AutoType in the bottom half of this article.

I use SuperTab because it saves me the trouble of opening my application's folder, especially for applications I use less frequently. It's a quick way to access recently opened documents from any application. SuperTab is especially useful those of us who prefer to use the mouse or trackpad over remembering lots of keyboard shortcuts.

New to version 4.0, SuperTab now allows for splitting tabs into smaller tabs. This is a great way to organize items smaller tabs. I have one tab for some bookmarks, another for AutoType workflows (see below), and one for three less frequently used folders.

Note: though items can be moved from one custom tab to another, custom tabs can’t be rearranged horizontally, but they can be moved up and down. Also, the screenshot below doesn’t show it, but you can also rename the title of your custom stabs.

You can set up SuperTab to include as little or much tabs as you want. The settings allow for adjusting the width, color, and opacity of the tabs, as well selecting an hot corner on your monitor to activate SuperTab. 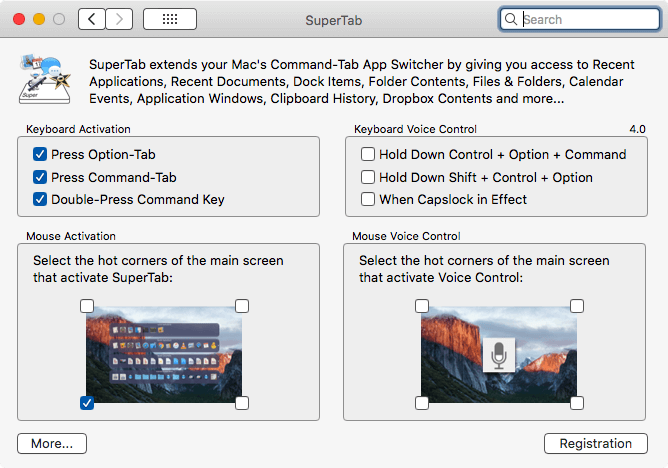 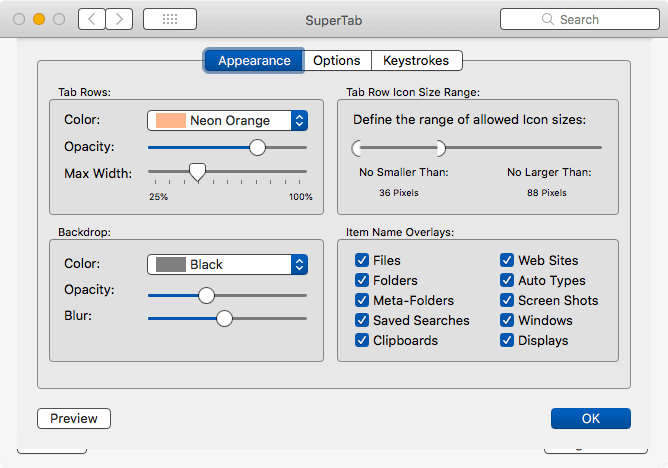 Also unlike the Apple Dock, SuperTab allows for interface persistence, which means you have the option for keeping SuperTab activated even when you're not holding the assigned hotkey – that is if you choose to use the hotkey to activate the user interface. I prefer using the trackpad and Dragon Dictate voice command.

One of the reasons I never use Apple's Application Switcher is because you have to keep your fingers pressed on the assigned hotkeys in order for the remain open. SuperTab gives you one of three options for how you want the interface to persist. It's all explained the program's settings.

For me, the most useful feature of SuperTab is that it can automatically hide and quit applications when they have been running in the background for a designated period of time. This feature is the best way to reduce desktop clutter and additional clicking and mouse moves. So for example, I can activate iTunes, browse and play an album, and the auto feature will hide iTunes when it's in the background for five minutes. 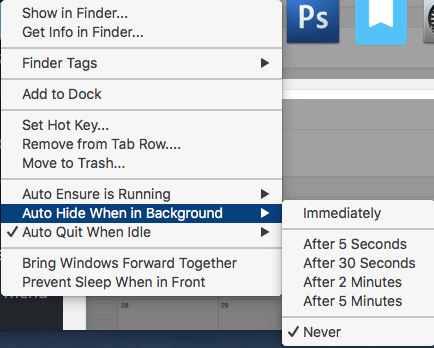 You can also apply a trigger that will automatically re-launch application when it quits.

I also have a SuperTab tab setup for my recently opened documents, which again saves the trouble of burring through Finder folders. SuperTab can also filter and display files with a assigned tags 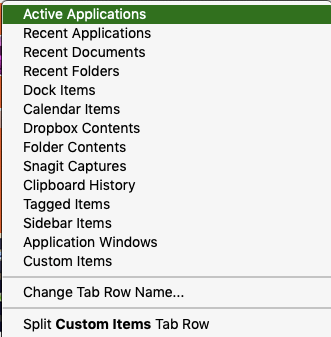 Each tab can be assigned a particular set of content, such as your active applications, Dropbox content, clipboard history, application windows, or custom items.

There’s even a tab for your upcoming Calendar events. That’s right, the application allows you connect it with your calendar and then choose which calendars and which date range you want displayed, (e.g., Today, Three Days, Work Week, Entire Week.)This tab is handy because means you don’t have to open your Calendar to view upcoming events, but instead just trigger the application and the dates are right there for you.

Though it’s easy to bookmark webpages in Safari or any other web browser, I find it easier sometimes to trigger SuperTab and click one of my less frequently used bookmarks. It’s easier because I don’t have to open Safari, then locate the bookmark in my Favorites bar. In SuperTab, I can configure bookmarked pages to open in a tab of an existing browser window, or to open as a new browser window.

The same goes for less frequently used application. Though I can easily launch applications using Alfred, I can also do it quickly when my hand is already on my trackpad by simply triggering SuperTab and then clicking on an application icon in my one of my custom tabs.

The recording features allow you to capture selected parts of your desktop, or you can trigger timed full screen captures. 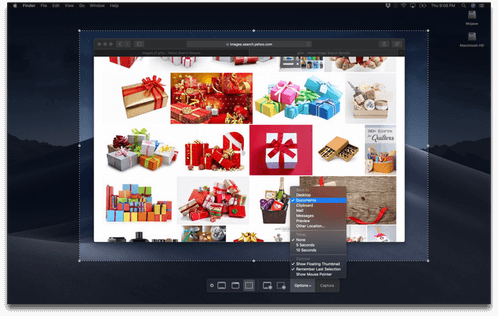 Note: the video recording feature is only supported in OS X Mojave. The feature doesn’t include a timeline editor, but it’s still a handy feature for quickly recording videos on your Mac. You can also include audio recordings in your capture and select where you want your video captures saved.

Another useful feature that I'm starting to use is the Meta-Folder, which allows for holding various types of content, files, applications, website bookmarks, and/or auto type workflows.

While writing this article I added a meta-folder the applications from what I call my Utilities tab. These applications are not used everyday, but I do want them quickly accessible when needed. Because they are in a meta-folder they don't take up space in a tab. (Note: you can select multiple items in the Finder to add to a meta-folder, instead of having to add each file or application individually.)

When I click on the meta-folder in the SuperTab interface, the contents (the added applications) appear like a context of menu items.

What is also handy about meta-folder is that they can be assigned a hotkey. For my Utilities meta-folder, I have the hotkey mapped to a Dragon Dictate voice command (“show utilities folder”), which triggers the meta-folder contextual menu without activating the SuperTab interface itself.

There's also an AutoType feature, similar to Keyboard Maestro's macros that you can set up to insert boilerplate text, or type certain keys (e.g., Space bar, Return, Left Arrow) in the order you set up. This action could be particularly useful for inserting login information for for say cumbersome banking site logins. 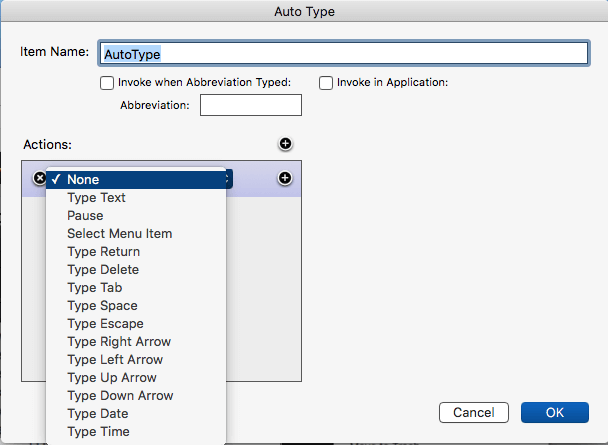 The Auto Type or action you set up appears as an icon in a tab and is available when you need it.

SuperTab is not necessarily a dedicated automation program like Keyboard Maestro, but its ability to automatically hide and quit applications, store screenshots and clipboard histories, filter files, and trigger keys make it a seriously useful tool for Mac automators and power users.

August 15, 2017
Last Updated on February 27, 2019 by Bakari Chavanu Last year I wrote a review of the multi-dock application, SuperTab, describing how it leaves Apple's traditional Dock behind in the dust...
Read More 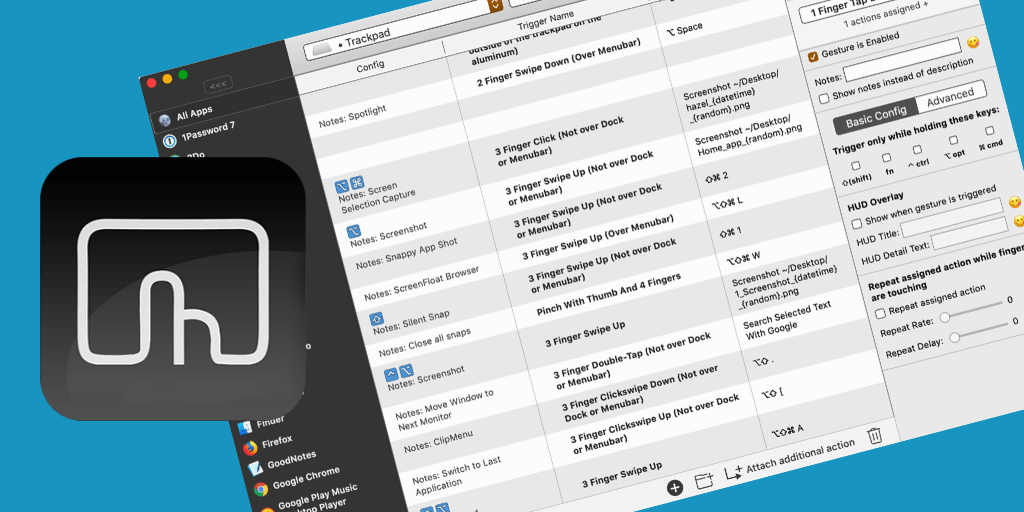 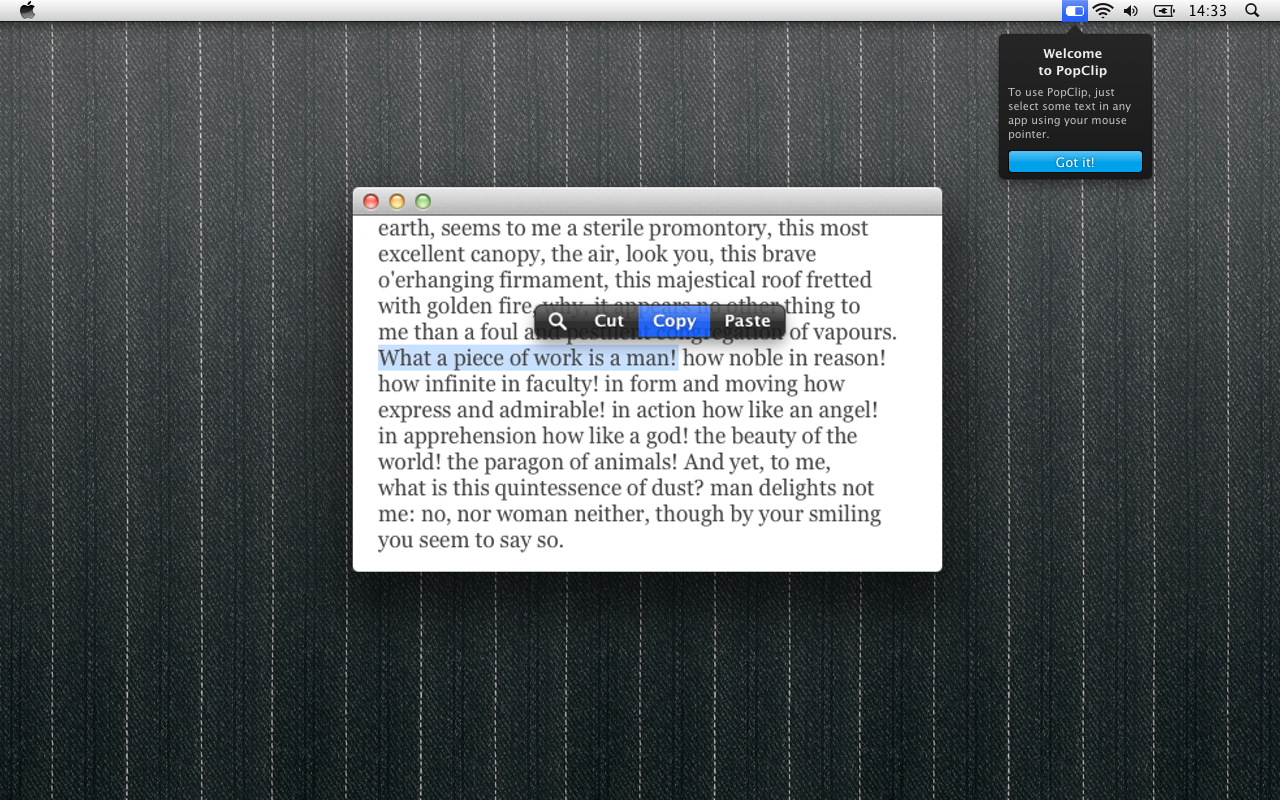 How to Create and Use an Alfred Filter List 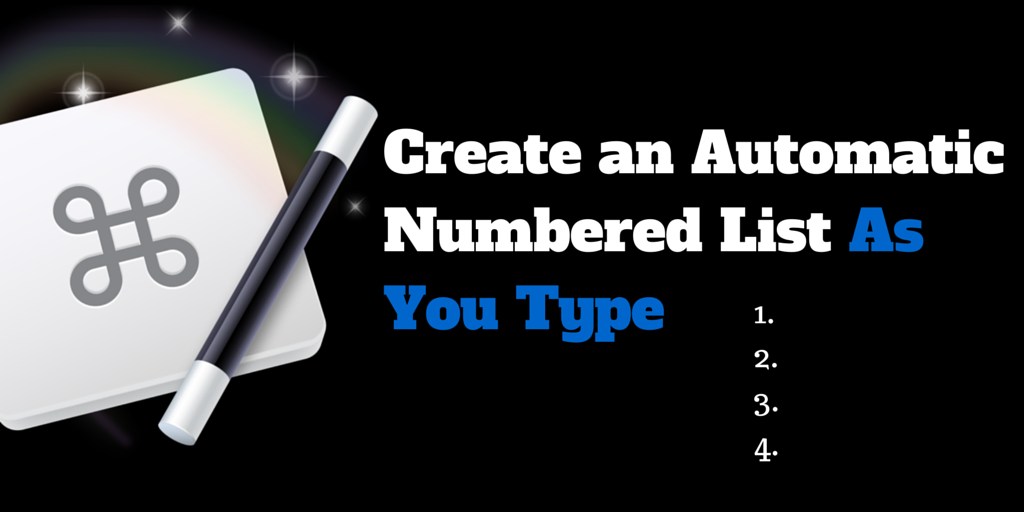 Create a Number List In Any Application Using Keyboard Maestro 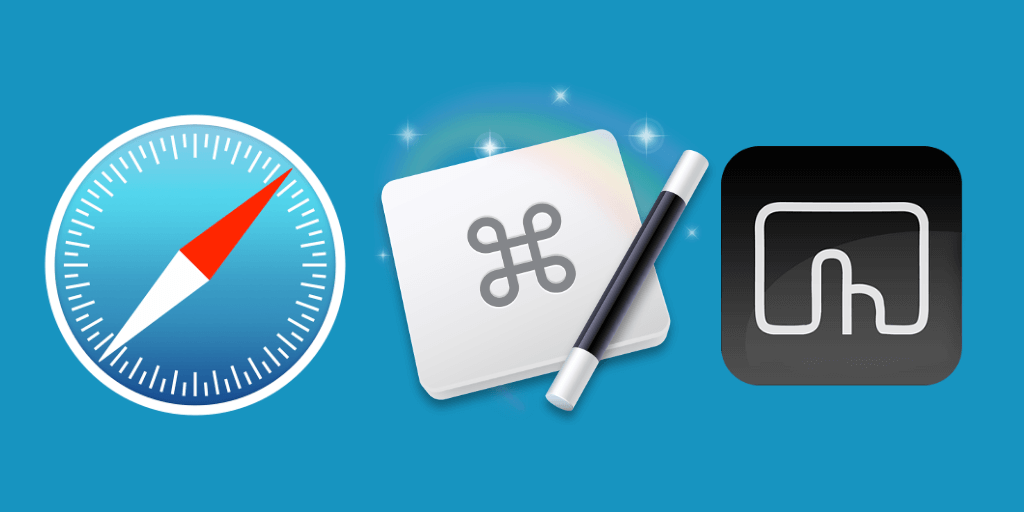 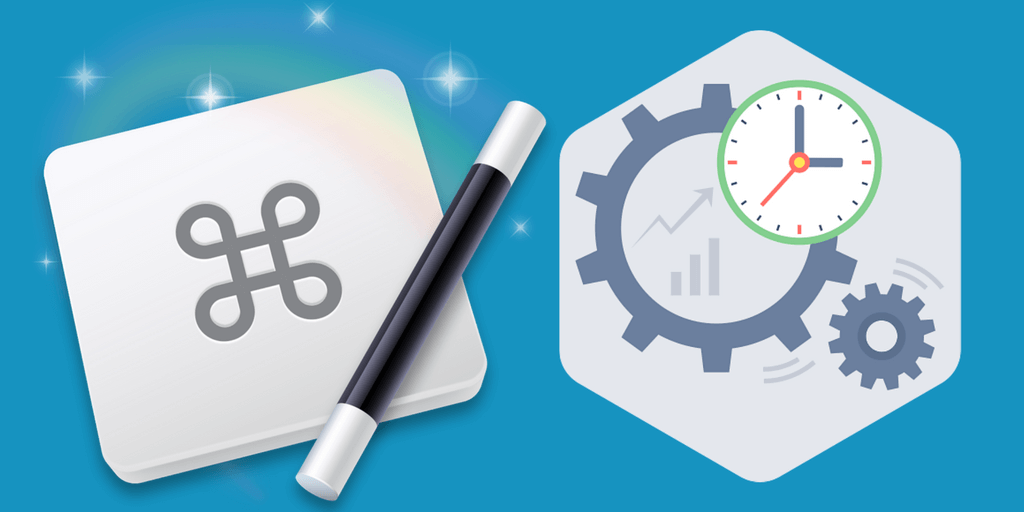 7 Trigger-less Keyboard Maestro Automations You Should Know About 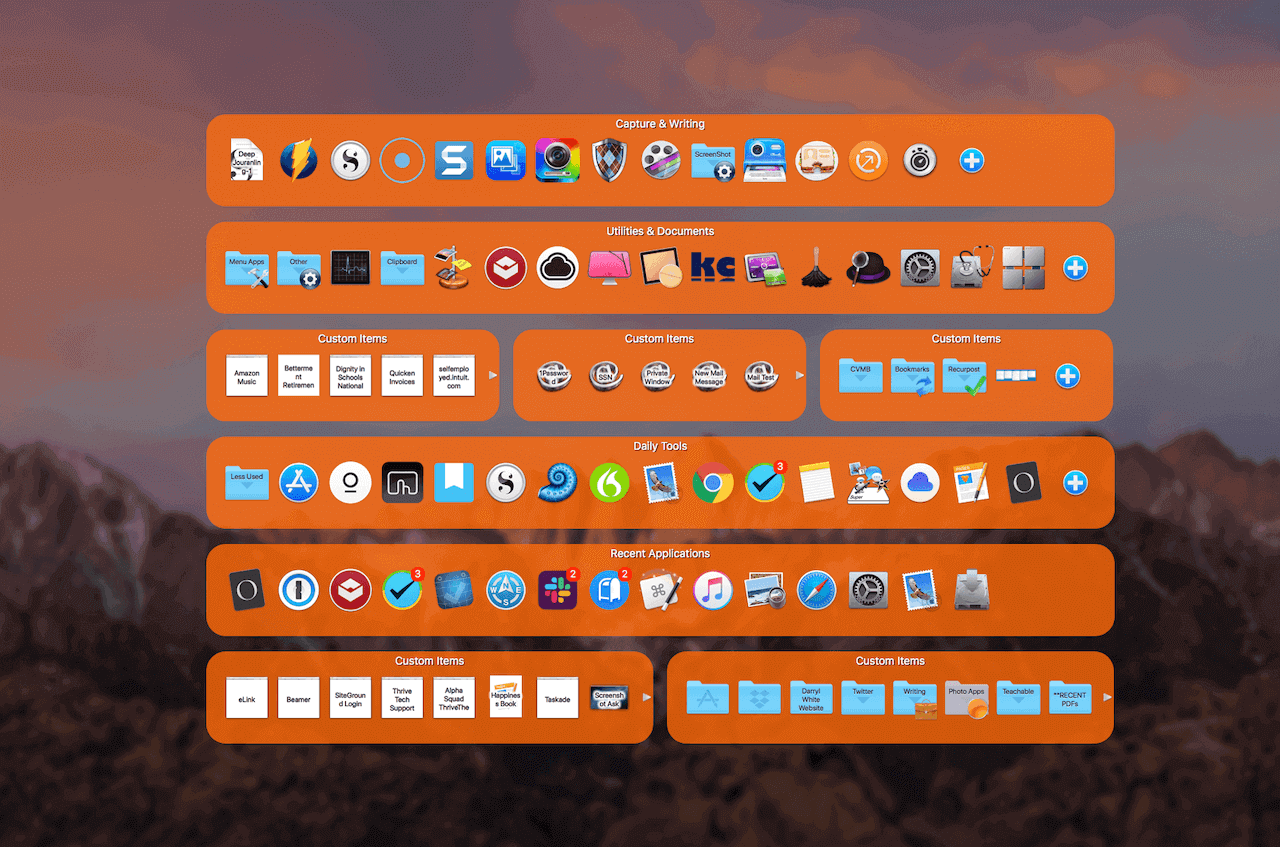 Do NOT follow this link or you will be banned from the site!
Get SuperTab for just $8 (60% OFF) Buy and Download
+ +